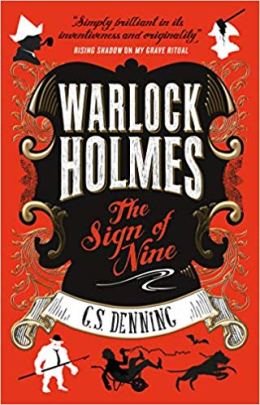 Warlock Holmes may have demons in his head, but now Dr. John Watson has a mummy in his bloodstream. Specifically that of the sorcerer Xantharaxes, who, when shredded and dissolved in a seventy-percent solution, produces some extremely odd but useful prophetic dreams. There’s also the small matter of Watson falling for yet another damsel-du-jour, and Warlock deciding that his companion needs some domestic bliss…

A huge thank you to Titan Books for providing me with a copy of this book in exchange for an honest review!

G.S. Denning is back with another book full of bizarre and hilarious stories following Warlock Holmes and Dr. John Watson. Even though The Sign of Nine picks up where the last one left off, you don’t need to have read the first three books in the series because the author explains everything and it’s easy to follow. I would recommend reading the previous books though because they are hilarious and have a unique take on the original Sherlock Holmes stories.

The Sign of Nine consists of 9 stories and the last, titled the same as the book, is the longest at nearly 100 pages. I did really enjoy this and I was engrossed in each story, however, I didn’t find them to be as funny this time round but they were definitely creative and the illustrations were awesome; they certainly seemed to pick the funniest scenes to bring to life. The author has a really awesome imagination and I’d love to know how he has come up with all these different supernatural twists!

My favourite – and possibly the most interesting – story was The Adventure of Black Peter Blackguard McNotVeryNice. I thought was the most creative and had the most depth. It was funny but it also had a tragic story too that involves mythical creatures! I thought the inclusion of mythical creature was so awesome and the author definitely picked the best ones to include. I thought The Sign of Nine was darker than the previous books and I personally really liked that but there was still a lot of humour there and you can just tell from that one title how silly this book is. The last story, The Sign of Nine, stayed true to the original and just added the supernatural twists. The ending was absolutely hilarious and that actually had me laughing at the ridiculous situation Watson found himself in.

In between Warlock and Watson’s adventures, we also have some short chapters that are from Watson’s dream journal and I thought these were really interesting. I don’t see a lot of dreamscapes in books and I thought it was rather refreshing but I was a bit confused by them. I think they were there to help you understand more about Moriarty and Irene Adler but I’m not entirely sure.

As always, Warlock was hilarious and my favourite character by far. I loved how his explanation for everything that was happening to someone was demons or supernatural things and then Watson would be looking for the most logical, mundane answer. I did think that Watson was more open to supernatural explanations/occurrences now though compared to the first book. I liked how it explored more of their friendship and Warlock’s concern over Watson injecting himself with that mummy’s ashes – feels so ridiculous writing that but it’s even more ridiculous reading it. In a good way, of course!

So we are currently four books into this series and I still think it’s such a creative retelling of the originals. If anyone ever asks me for a humorous read I’ll definitely be pointing them towards these books and if they are a fan of the originals then all the better!

Follow Divine World of Books on WordPress.com
Join 636 other followers