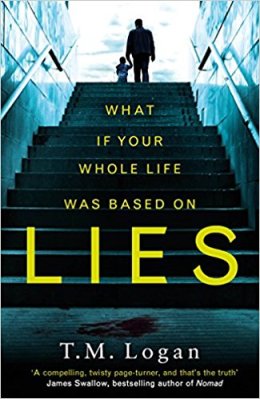 Joe Lynch is just an ordinary happily married man – until one split-second decision throws his life into crisis.

When Joe sees his wife having a confrontation with family friend Ben, it’s the first hint that she’s been lying to him – about everything. And when he steps in to protect her, a harmless shove knocks Ben to the ground. And he’s not moving…

This is the first book I’ve read by T.M. Logan and I’ll definitely be checking out his other books in the near future. Despite being a slow burner, Lies was one of the most compelling thrillers I’ve read in a while. It was packed with so many shocking twists that kept me engaged throughout and turning page after page. I read 400 pages in one sitting I was that hooked on the story.

Joe Lynch is happily married and content with his life until one split-second decision throws his life into chaos. From that moment on, nothing will ever be the same for him and he will uncover some dark secrets about those closest to him. Stalked and tormented relentlessly for making a mistake, Joe is really pushed right to the edge and is in danger of his whole life, family – everything he has worked for – slipping away from him. It’s terrifying to think how one person can be so destructive and violent. Lies is a story that will leave you feeling incredibly unsettled throughout and will have you questioning just how well you know the people you trust most.

Joe is honestly the kindest and most thoughtful character I’ve come across in a while. He’s so forgiving to those who don’t deserve it and I loved seeing how much he adores his son. I also loved how Joe and his wife were the complete opposite of what you’d expect from a married couple. His wife Mel is so confident and career driven while Joe is happy to work part time to look after their baby. Isn’t that so awesome? I love seeing career driven women and loving fathers in any books! More of this, please!

What I loved most about Lies is that it was impossible to pin down what the story was really about. I think the author deliberately kept the synopsis vague so he could throw all these surprises at us. I was on solid ground one moment only to have the rug pulled out from under me the next. I felt like I was being spun in all these different directions and given different paths to take but none of them could have prepared me for the massive twist at the end. The whole way through I felt so unsettled by the story. I was suspicious of characters but didn’t know why and I was struggling to decide if they were trustworthy or not. The author did a brilliant job creating some incredibly deceitful characters.

The twist at the end was jaw-dropping. I was honestly so shocked and felt just as betrayed as Joe did. Nothing could have prepared for me for that. I’m wondering if the author left little clues that I missed throughout or if he really just dropped that bombshell out of nowhere. An amazing twist and such an explosive end to the story! Lies is a shocking must-read thriller that shows how one split-second decision can result in dire consequences. I highly recommend it!