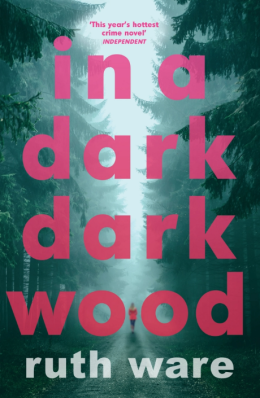 Nora hasn’t seen Clare for ten years. Not since the day Nora walked out of her old life and never looked back.

Until, out of the blue, an invitation to Clare’s hen party arrives. A weekend in a remote cottage – the perfect opportunity for Nora to reconnect with her best friend, to put the past behind her.

But something goes wrong.

And as secrets and lies unravel, out in the dark, dark wood the past will finally catch up with Nora.

I’ve read so many bad reviews for this book but I actually really freaking loved it! Ruth Ware is definitely one of my new favourite crime writers. Her books keep me guessing right until the end and then always leave me reeling, without fail. This one was very much the same and all the way through I was kept in the dark about what was happening. I didn’t see the ending coming at all!

Nora is the main character and I actually liked her a whole lot more than Lo who was the main character in The Woman in Cabin 10. She was just so much more likeable and I found her to be a lot more relatable. I also really liked how she was an author writing crime fiction. Pretty funny how she ended up in a nightmare scene similar to her own books. I think it would have been better though and made Nora less pathetic if she hadn’t left her old life behind because of a bad break up with her high school sweetheart. I found it ridiculous how a decade later she was still mad about it and it was kind of pathetic that she was finding it so hard to let go. Honestly they hadn’t even been dating that long. I’d understand if they had been going out for years but it was literally a six month relationship and ten years later she is still mad about it. The way she was going on made me think they’d had an accident and one of their friends died. I wasn’t impressed when I found out it was because her boyfriend dumped her and she didn’t take it well. That was the only thing that bothered me about the story.

I also really liked Nina who was incredibly sarcastic and made a lot of snarky comments. Every time something happened she’d be there pulling a face in the background or saying something sarcastic. There is a really funny scene with a seance where they use something similar to a ouija board. It was such a random scene and I couldn’t stop laughing because Nina and another character end up goofing around and spelling out funny things. Another character in the book is Flo and I felt sorry for her because she genuinely seems like a nice person but she’s just so unhinged. I suspect she wasn’t treated very well which added to her mental health and insecurities.

I love how the story was split between the past and the present. You got to learn a bit about Nora and Clare’s friendship in school and how close they used to be. Nora basically lived in Clare’s shadow and without Clare, she would have been a nobody. Clare pretty much made their classmates notice Nora. I couldn’t pinpoint Clare’s personality, sometimes she seemed like a really nice character but then other times she seemed toxic. I’m not really surprised they didn’t stay in touch when Nora left, seems like she was better off without Clare in her life.

It also showed the events leading up to that fateful night and then added in a few short chapters from the present which showed Nora in hospital battered and bruised. It had me intrigued and hooked on the story because I wanted to know what had happened that ended with Nora in the hospital in a bad way. She had memory loss and couldn’t remember anything concrete, only fragments. She spends most of her time in hospital trying to piece together what happened and running through the suspects. Unfortunately, everyone had a good motive for murder so I was floundering around trying to guess whodunnit.

The anticipation was killing me the closer I got to the ending. I definitely did not see it coming. I knew someone was going to die but I had no idea it would be THAT person! I then didn’t know for certain who the murderer was but I made a stab in the dark. Turns out, my guess was completely wrong and since I picked the most obvious culprit rather than the least obvious, that’s probably why! I fell for Ruth’s trap, hook, line, and sinker. I honestly didn’t see the ending coming at all and I was completely shocked. There were some messed up characters in this book! I felt sorry for Flo who was a really unhinged character throughout the book. She definitely deserved a better ending. I did also love Nora’s determination to get to the bottom of what had happened. She refused to lie in hospital and actually went out and did something. Ruth again took me by complete surprise and I can’t wait to read more from her!