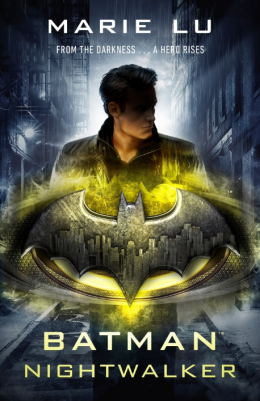 An impulsive act on his eighteenth birthday sentences him to community service at the infamous Arkham Asylum, home to the city’s most dangerous and deadly criminals.

Amongst them is Madeleine Wallace – a brilliant killer and Bruce’s only hope to save Gotham from its new menace: the Nightwalkers.

But can Madeleine be trusted or is this all part of her plan to destroy the city forever?

You don’t need superpowers to be a superhero.

Click here to read my review of Wonder Woman: Warbringer by Leigh Bardugo!

I was a bit hesitant going into this book because I hadn’t read a lot of great reviews for it but I actually ended up loving it! It was great seeing Marie Lu’s interpretation of a young Bruce Wayne and I think she did a pretty amazing job! I flew through this book and struggled to put it down. It’s also quite a short book and can easily be read in one sitting. It’s just one of those books you can easily devour in a few hours.

Right from the start I loved Bruce, he just seemed like such a great guy and a really good friend to have. He did a lot of stuff and messed around a lot but he is a genuinely nice character and looks out for the people he loves. I loved his friends, Dianne and Harvey. I loved how close they all were and I loved his relationship with Alfred. Bruce is honestly such a likeable character and I was so excited to see his development throughout the story.

This is the first book I’ve read by Marie Lu and I really like her writing style but similar to Wonder Woman, it had a lot of slow scenes and it felt like not a lot was happening. While Bruce is doing community service he comes across Madeleine and even before they’ve exchanged any words, he finds himself constantly thinking of her and he continuously visits her cell in Arkham Asylum so it felt very repetitious at times. It was those same two scenes just repeated for a fair chunk of the book and then there was fighting with Bruce’s billionaire friend which was kind of funny. Like first world problems, your rich billionaire ex-friend is jealous of you. I just wanted to tell the guy to shut up.

I did find it slightly ridiculous that Bruce’s punishment for helping the police catch a criminal was doing community service in Arkham Asylum – with the most dangerous criminals – and no one even objected to it? Like Alfred, is that normal to let them make him work in an asylum? But hey, it is Gotham City!

“You have a heavy heart, for someone with everything.”

The one good thing about it was being able to picture the scenes with Bruce and Madeleine. I really loved Madeleine, she was such a mysterious and intriguing character. You never know if you were getting the full picture with her or not. Just when you thought you’d figured her out she’d reveal another layer and you’d find a whole other person underneath and be right back at square one. I loved picturing her and Bruce interacting. She’s a very manipulative character and she can read people very easily. She was honestly a crazy mastermind and I’d for sure be scared of her but she seemed oddly vulnerable around Bruce. She revealed a side she kept hidden from everyone else which made you think is she really as bad as she makes herself out to be?

“Two kinds of people come out of a personal tragedy, you know? And you’re the kind that comes out brighter.”

Madeleine has such a heartbreaking past and she suffers almost the same fate as Bruce. They both have lost their family and while Bruce came out relatively okay, Madeleine came out a criminal. It was so devastating finding out about her past and you could see how it had hardened and sharpened her. She had none of the luxury that Bruce did and was left to fend for herself. I found myself softening towards her and actually liking her the more that she revealed herself.

When the nightwalkers start targeting Bruce, there are quite a few fight scenes which I loved! Bruce was like a full on badass, flinging knives and throwing punches at everyone. He is just amazing! I love how everyone underestimated him and thought he wouldn’t be able to defend himself and then he just knocks everyone out. These were for sure my favourite scenes but unfortunately there wasn’t a lot of them. I was craving more fighting scenes and felt like this book lacked a lot of excitement. If there were more fighting scenes it would be way more exciting and fun. I loved how he wasn’t afraid to take on nightwalkers to defend those closest to him – there’s no denying that he is seriously brave! It made me appreciate Batman more because, sure he has lots of money, but to go against all these bad guys with no superpowers is pretty awesome! I really want to watch all The Dark Knight films again now!

I really liked the ending and it actually surprised me because I wasn’t expected it. Not saying anything because I don’t want to spoil it but I should have realised that wasn’t the end! All in all, I really loved this book and it was nice to read a book from a guys point of view instead of a girls. I’m really excited for Catwoman now!

Follow Divine World of Books on WordPress.com
Join 636 other followers