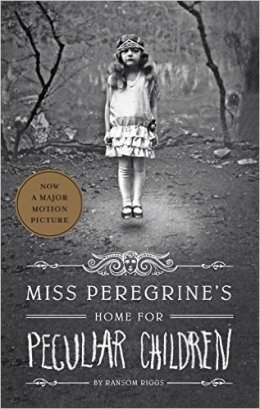 A mysterious island. An abandoned orphanage. A strange collection of peculiar photographs. It all waits to be discovered in Miss Peregrine’s Home for Peculiar Children, an unforgettable novel that mixes fiction and photography in a thrilling reading experience. As our story opens, a horrific family tragedy sets sixteen-year-old Jacob journeying to a remote island off the coast of Wales, where he discovers the crumbling ruins of Miss Peregrine’s Home for Peculiar Children. As Jacob explores its decaying bedrooms and hallways, it becomes clear that Miss Peregrine’s children were more than just peculiar. They may have been dangerous. They may have been quarantined on a deserted island for good reason. And somehow – impossible though it seems – they may still be alive.

I love how this book combines fiction and photography, it is such an interesting mix and I love how they were so intricately woven into the story. The photographs will be talked about and shown to Jacob and then they are shown to you which I thought was fascinating. We get to see the same photographs that Jacob is being shown so we can feel the same emotions as him – shock, curiosity, horror, to name a few. I absolutely loved it and it makes the story incredibly fascinating. I just love how it is all built up from these photographs, they have breathed so much life into this story. It’s such a creative book and I really cannot applaud Ransom Riggs enough for what he has written, it was so captivating. I was absorbed in this story from start to finish and couldn’t put the book down.

I was delighted when I started reading this story and found how much I loved it from the first few pages. I wasn’t sure if I would like it but if you are into fantasy, supernatural, paranormal and mystery then this book will definitely be for you. All of the children in this story have some supernatural talent and the start of the book is very mysterious. All we know is that there is an orphanage on a mysterious island that housed children with many peculiar talents. Jacob has grown up hearing these stories from his grandfather ever since he was a baby but he always believed they were a fairy tale that his grandfather had made up. But then a tragedy strikes and determined to find answers to his grandfather’s stories, Jacob travels to the remote island to find the orphanage and search for the peculiar children he believes never actually existed. All he discovers there are the crumbling remains of the orphanage and in the decaying rooms he finds photographs that confirms his grandfather’s stories – the peculiar children were real.

I absolutely adored Jacob’s character, I really connected with him right from the start and cared about what happened to him throughout the book. I thought that he was a really relatable character in some ways and I sympathised with him when his whole life is turned upside down after the family tragedy. I did not like his mother at all and even though she was only in the book a little at the start, she annoyed me so much. She doesn’t seem to care for Jacob at all or care for his wellbeing. I wasn’t sure how to feel about his father, I did like him at some points but thought he was rather weak and that he only cared for Jacob’s wellbeing because he was his father and had to show some parenting. I really liked Jacob’s grandfather and I thought Jacob and his grandfather were treated the same a lot of the time, they are both shut off from the world and don’t really connect with their family. They were similar in a lot of ways and at times I saw a real connection between them which was nice.

I loved Emma she was definitely my second favourite after Jacob. I thought she was the only character next to Jacob who had a backstory. All the children who live in the orphanage don’t really say how they ended up there, you just learn about their talents and what they can do. Emma, on the other hand, had a really nice backstory and I sympathised with her so much. I thought that she found it hard to trust Jacob when they first meet and she came across as someone who had a lot of strong and wild emotions. You find out why though later on and it is incredibly sad but at the time it’s a touching story to add in and I appreciated that. I love her peculiar power as well, it’s so awesome!

I really liked Millard I thought he was a funny character. I kept waiting for him to show himself before I realised that he really is invisible and I thought that was so weird. I thought at first that he could turn himself invisible but that’s not the case and it definitely made the book a fascinating read. Olive was so cute and such a bubbly character I really can’t wait to read more about her in the second book! Enoch was so strange and he creeped me out a little bit but I started to warm to him the more he was in it and he has such a rare and definitely peculiar power. All of these peculiar children really stood out for me throughout and they definitely made the book so captivating. They each have their own unique personality as well and they were so fun to read about!

There was a nice little plot twist at the end that I didn’t expect even though it was pretty obvious. The ending is incredibly action-packed and has a lot of really gripping scenes. I flew through the last fifty pages desperate to reach the end and find out what happens. I will definitely be recommending this book for others to read and if it looks like something you’d enjoy, definitely give it a try!